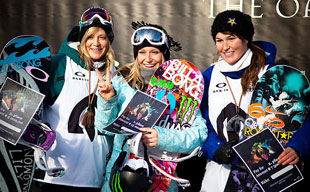 The Oakley Arctic Challenge brought the circus of sickness that is the TTR World Tour to Oslo this weekend, with a whole host of the world’s best riders descending on the Winterpark resort. Amongst them were two Brits – Aimee Fuller and Jenny Jones. Which is pretty damn cool considering its an invite-only event, and one of the most prestigious in snowboarding. With the contest repeating the successful slopestyle format of last year, there was plenty of chance for the riders to show off their skills – especially as the course was perfectly shaped, with plenty of space between kickers and some sweet looking rails.

After a tense semi-final which saw the likes of Ethan Morgan and Tyler Flanagan owning the course, it was an older, more experienced rider who eventually held it together best to claim the men’s title. Chas Guldemond came through with a cab 1260, a backside 1080 and a double backside rodeo on the kickers to take the win ahead of Flanagan and Sage Kotsenburg. Unfortunately in the women’s comp Aimee Fuller wasn’t feeling too good, trying only one run and finishing down in 11th. But the fact that she got an invitation in the first place speaks volumes for her talent, and we’re sure She’ll be back next year. With Aimee out of the six woman final, it was left to golden girl Jenny Jones to fly the flag for the UK, which she did with her trademark calm and skill, stomping her run cleanly. While the judges didn’t mark her as highly as Jamie Anderson or 2nd place Spencer O’Brien, it’s still an awesome result for the Brit in what was the first ever women’s comp at the Arctic Challenge. Hit more to see the results and the videos of the winners’ runs.
External Link
site map | cookie policy | privacy policy | accessibility statement